The Friends of The Eric Sloane Musuem is grateful for the support we receive from our members.  Thank you!

Kent, Connecticut, May 27, 2013—The Eric Sloane Museum is currently seeking entries for the Trash Art: Re-use, Re-cycle, Re-Imagine, and Re-purpose exhibit being held at the Eric Sloane Museum from July 20th to July 27th. Local residents of all skill levels are encouraged to create art from re-purposed, recycled, discarded, or used materials. Prizes will be awarded in various categories including an under 18 category, and participants can even choose to have their artwork offered for sale to the general public.

Participants should deliver art to the Eric Sloane Museum between 10am and 4pm July 4-8; July 11-14; and July 18th-19th. Participants should expect to fill out a form with a description of materials used, name, and title of the piece. There is a limit of five entries per person. An opening reception will be held on July 20th from 11am-4pm. During the reception, Bob Coppola of the Friends of the Eric Sloane Museum will be holding a workshop for children and young adults entitled Making Toys From Discarded and Everyday Objects. The reception and workshop are free. Participants should also plan on picking up their works of art by July 28th.

The Eric Sloane Museum was built as a collaborative effort between Eric Sloane and Stanley Works of New Britain to commemorate the tool company’s 125th anniversary. Sloane is known to lovers of Americana as an artist and author who brought to life many forgotten customs and skills of past generations. In all, Sloane authored and illustrated over 38 books.

The Eric Sloane Museum is located in Kent, Connecticut on Route 7 (31 Kent-Cornwall Rd.) just north of the village of Kent and the intersections of Route 7 and 341. The museum is open Thursday to Sunday from 10am to 4 pm.

Trash Art:  Re-use, Re-cycle, Re-Imagine, and Re-purpose is part of a series of events held on the grounds of the museum throughout 2013 that playfully explores the relationship between the Eric Sloane Museum and its environs, which was once the dump for the town of Kent. The Eric Sloane Museum is seeking entries for this exhibit and invites anyone to participate in this unique, thought-provoking artistic experience that celebrates the creative side of re-cycling.  Anyone of any age and artistic ability is welcome to participate and there is no charge to do so.  Participants in the Trash Art exhibit will need to create their artistic works from recycled, discarded, or used materials.  Prizes will be awarded in various categories including an under 18 category, and participants can even choose to have their artwork offered for sale to the general public.

For more information on the Trash Art exhibit, contest, and sale, please contact Barb Russ of the Eric Sloane Museum at 860-927-3849, or visit www.friendsoftheericsloanemuseum.org. 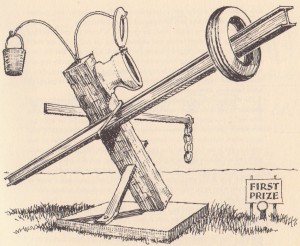 The Eric Sloane Museum is seeking entries for their Trash Art exhibit.  We invite you to participate in a unique, thought-provoking artistic experience that celebrates the creative side of re-cycling by submitting a work of art that makes use of discarded materials.  Anyone is welcome to participate!

Participant Categories:  Under 18, Over 18, Professional Artists – Prizes awarded in each

Artistic Mediums:  Any form of art to be displayed indoors or out of doors

Requirements:  Art must be constructed from discarded, repurposed, reclaimed, or recycled materials.

To view the video: