Two of the nicest gentlemen you would care to meet. On the left is Andrew Rowand, who has done an incredible amount of work as the Site Manager for the museum. Andrew is incredibly hard working, has fantastic ideas, and is very knowledgeable about Eric Sloane, the museum, and many, many historic crafts and trades. He has been a great partner!
On the right is John Pennings, my successor in every meaning of the word. John is a natural leader, and is very skilled and knowledgeable in more things than I can even remember. Thank you, John, for serving as our board president.
We’re surveying the lean-to shed and listening to Andrew’s needs for an enclosed space dedicated to education…it looks as if this will be the next major project that the Friends of the Eric Sloane Museum will undertake in support of our mission to assist the museum. We will keep you posted!

This nice note came in the other day from Friends of the Eric Sloane Museum member Dayna Wenzel, a very talented artist – Dayna’s works can be seen via:

“I have been fortunate to participate in the last 2 art shows celebrating Eric Sloane and his wonderful, diverse work.  I have especially enjoyed your book which I received as a participating artist.  The positive work of the museum and the Friends group is very impressive and so very worthwhile. ”

Thank you, Dayna!  We appreciate having you as a member!

Thank you, Scott, for your kind words regarding the talk, the museum, and the Friends group. We’re so pleased to have you as a member of the group. For those of you who don’t know Scott Sheldon, he is a well-known aficionado of the works of Eric Sloane as well as a very talented woodworker and carpenter. It was great to see you and your brother again!  Here is what Scott shared with the Friends of the Eric Sloane Museum:

“My brother and I attended the talk given by Dr. Mauch yesterday. It was some time very well spent. The talk was very informative and interesting as he went over some of the fine points of the Cloudscapes done by Eric Sloane. My appreciation of Sloane‘s work was increased be caused of the knowledge shared by Mr. Mauch. It was great to learn more about the depth of Sloane’s paintings. I missed several of the events that “The Friends of Eric Sloane Museum” held this pass season and now I regret it. Next season I will try to make every event. Dr. Mauch told me of up coming events for next year and it sounds very exciting. I would strongly recommend becoming a member of “The Friends of Eric Sloane Museum”, check it out on FB and online. Also want to mention Barbara Russ Museum Assistant aided in the talk with her vast knowledge of Eric Sloane. Thanks to both Dr. Mauch and Barbara.”

Thank you, Caroline! I appreciated reading about your experiences as an artist in the show – and we all appreciated as well your beautiful work.

I met so many nice people during the August 23rd event For Spacious Skies: A Day to Celebrate the Sky!  The weather provided a dramatic “sky backdrop” to all of the events – a typically beautiful Northwest Connecticut sky throughout the day. 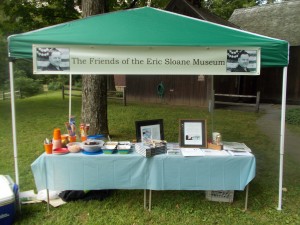 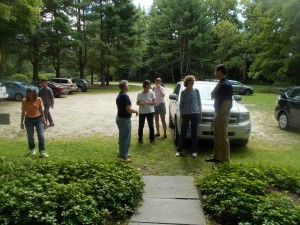 An impromptu “fan club” quickly surrounds guest meteorologist Mike Cameron from Channel 3 WFSB in Connecticut.  Mike provided a great in-depth look at the difficulties in forecasting the weather of Northwestern Connecticut, something echoed by Eric Sloane some 40 years ago when he was writing of weather patterns of the same geographical region – “…if you don’t like the weather now, just wait a few minutes”. 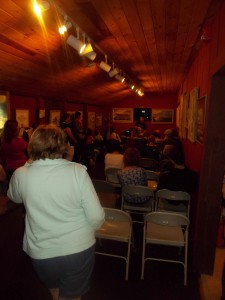 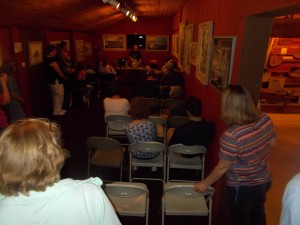 John Pawlowski was so kind to come over and fix the attention of everyone in the audience by creating a cloud in the gallery of the Eric Sloane Museum. 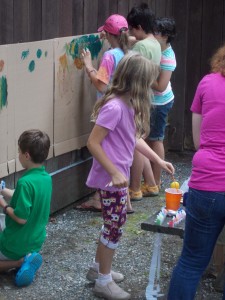 Some of the many children in attendance at the event working on a cloud mural together. 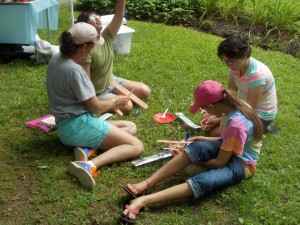 A number of young pilots assemble their balsa gliders and rubber band-powered planes to take part in the flight competition held on the grounds of the Eric Sloane Museum. 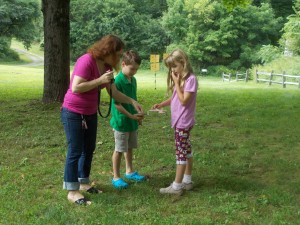 Getting ready for a test flight…. 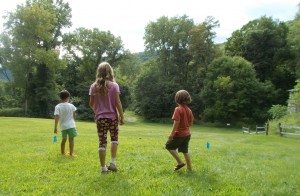 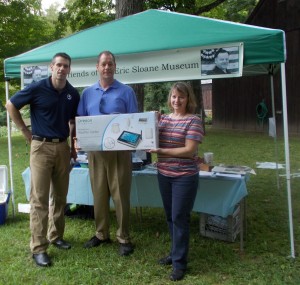 At the end of the day, the Friends of the Eric Sloane Museum presented Barbara Russ with a new weather station to be used in the museum.  Barb requested the weather station through the friends as it would allow the museum to become a weather reporting location and it can be used with school tours and children and young adults to make weather observations and data-driven meteorological prediction. 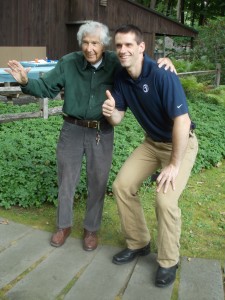 Internationally acclaimed meteorologist Jack Borden, who launched the “For Spacious Skies Project”, steals a moment with confirmed fan Mike Cameron.  Mr. Borden spoke with participants about becoming more aware of the sky and all that it has to offer to us. 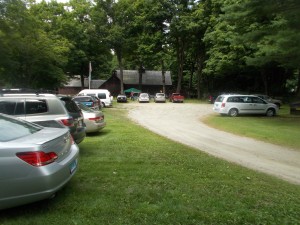 The day is winding down and the parking lot is beginning to thin out after the August 23rd event For Spacious Skies: A Day to Celebrate the Sky!  Throughout our journey home, the panorama of the sky at dusk reinforced what excites, motivates, and encourages people like Jack Borden and Mike Cameron.  Look at the sky, folks…you won’t ever be disappointed.

It was a wonderful day, full of enthusiastic and curious people who ranged in age from 2 years old to 91 – more about my new-found 91 year old friend in my next post.  He absolutely made the day for me…

Our thanks to the newest members of the Friends of the Eric Sloane Museum: