Readers of this blog know that Eric Sloane painted a number of murals over his lifetime, perhaps his most famous being the one he executed in the lobby of the Smithsonian Air and Space Museum in Washington, D.C.  I came across these photographs I took some years ago and thought I would include them here.  Readers are encouraged to submit photographs and descriptions of murals known to be executed by Eric Sloane to the “Resources” section of the friends of the Eric Sloane Museum website (www.freindsof

At the time these photographs were taken, the mural pictured had been rescued by some folks at what was being developed as the Cradle of Aviation Museum on Long Island (https://www.cradleofaviation.org).  I was invited by Eric Sloane’s 5th wife, Ruth Hinrichs, to view the mural which, if I remember correctly, had just been re-discovered in a storage facility.  I believe that the mural was removed by some workers who were dismantling a hanger at the old Roosevelt Air Field.  The workers clearly cut it out of the wall – the nominal studs are still visible under the plaster.

The mural encapsulates neatly themes that ran throughout Eric Sloane’s career.  It is within this early mural that we can see Sloane’s interest in depicting the past and progress, as well as his playful sense of humor, evidenced by the treatment of the light switch and telephone at the lower left of the mural. 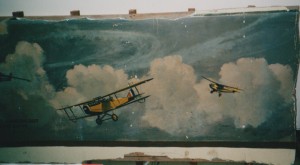 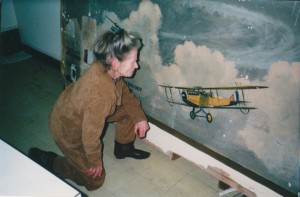 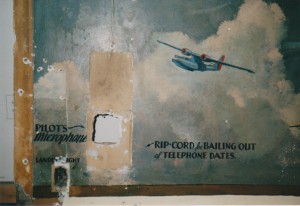